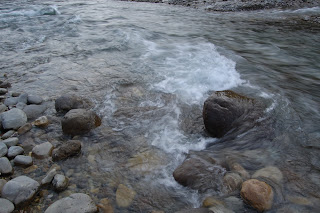 Notice definition number 5. This is the one place I hate being and that is exactly where I am. I am a big rock in a gushing stream, being subjected to a constant erosive force of the water, until it wears it out so much that it cannot hold on its own. The current is deceptive. From the outside, I seem in control. I seem strong, apparently directing the flow of the stream. On the inside, I know I am stranded and tired. It is not the one big knockout punch but the many tiny needles that the cold water pierces through my layers. It is loosening me up layer up by layer, till I become nothing but particles of sand and dust in the stream, like the million others there are, flowing haphazardly where the current takes them. The sooner I break free from the current, the better. When an unstoppable force meets an immovable object, whichever stands the test of time wins. Time is not on my side, my will still is.

I am a lover of analogies and metaphors. But the one you wrote about here is so sad. I suggest a slight change in the metaphor. You could be a big rock on the beach. All you have to do is build a wave breaker around yourself, that way you can still enjoy the beauty of the waves and at the same time don't let its brutal force get to you.