I thought of calling it chicken soup but then I didn’t want to offend the vegetarians in any group. I didn’t even use a name of a Chinese variant of the soup because there might be members from the Jain community whose sentiments I might hurt unintentionally. So here I am labeling my next post “Green Soup for Mobster’s Inc” Do I need to tell you why? I do not want to be the next person beaten to death with iron rods by a mob of 60 men in broad day light in a buzzing corporate complex for doing what is required of my job. Lastly, as an added precaution, I will write the title of this post in Devnagri script to prevent the MNS hackers from tearing my blog down. Since all measures are in place, I guess I can start with the recipe now.

Ingredients:
Angry Men – 10-12
Leader – 1 to 2
Victim(s) – Depends on how memorably bloody you want the recipe to be.
Sensationalist News Channels – Even one is enough.

The recipe serves two- the leader and his interests.

Closing Note:
Why discuss when you want to create a big fuss? What is life in front of political turmoil and strife? Why talk when you can kill? The recipe is the easiest way to prove a point in the country today, as popular as two-minute noodles. Try it today!!

Email ThisBlogThis!Share to TwitterShare to FacebookShare to Pinterest
Labels: Cribber's Corner, Fundamentalism, India, Mumbai, Need for Change, Politics, Take it with a pinch of salt

It had been raining heavily since four hours, but since we were in the comforts of our training centre, we didn’t realize how the weather situation in the locality was. So much was our ignorance that we decided to stay back and practice for an upcoming test. My friend and I consequently decided to go home at 8 pm. The rain had receded but the effects of the rain were still evident in the form of the traffic jams. There was no sight of a rickshaw. Considering how far away from civilization our training centre is, it was the only way of getting to the nearest station or bus-stop. Since there was none, it only spelt bad news for us. We had only two options, either wait or walk.

In the Mumbai rains, we did not have much of a chance of staying dry with only our umbrella for our protection. So we chose to wait a bit and if nothing would work out in a while, we would walk towards the station. We waited for 15 minutes with not a single rickshaw came our way. We saw a tourist taxi taking a turn down our lane. We looked at each other, both hoping that we get a lift. As if the driver had read our mind, he stopped in front of us and told us he was going towards Ghatkopar (a suburb in Mumbai) and asked us if he could drop us anywhere on the way. It was not where we want to go, but it was a worthwhile compromise.

I had never thought I would take a lift from a stranger, especially after all those stories of them being untrustworthy and bad character. But surprisingly, the thought never crossed my mind. For me he was an angel sent to help us and I could not have refused. With two of our colleagues joining us too I didn’t feel there was any reason to worry. He told us he’ll drop us at a junction near the railway station, which was a 15 minutes walk from that junction. We gleefully accepted.

Somewhere on the way, one of our colleagues got a call. He said to the person on the other end of the line “I am sorry I am late. I was stuck because of the rains. I am in a cab right now. Will see you in 30” Yes, cab he said. He spoke in English and I was just hoping that the driver didn’t understand the language because what he said was outright rude. I wondered what makes us so unappreciative of the good that others do to us. Two minutes later, he dropped us where he had promised. I said thank you, though I didn’t know if it was sorry that I should have said.
1 comment: Links to this post

The Fountainhead belongs to the last category. It is so beautiful a book that I don’t feel qualified enough to review it. The book surely inspires, but it inspires each person differently. This is how it inspires me.

I liked many aspects of the book. Each aspect was represented by one of the Fountainhead’s protagonists. Each represented an ideology of living, ideologies which can’t be categorized as valid or invalid. The book exposes you to so many facets of human nature that it leaves you heavy with thoughts. 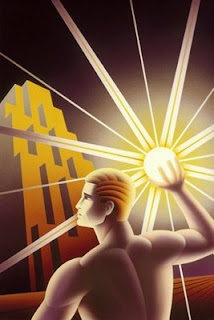 The egotism redefined by Roark was at the forefront. I personally belonged to a school of thought that despises the whole concept of egotism but this book made me rethink my stand. Is altruism positive in its truest sense? Is it not breeding a world of dependants? Why is living for one’s own self considered selfish? The book preaches egotism as the freedom of an individual, of morals, creativity and thought. All it implies is respect for one’s own space and that for someone else’s.

Dominique Francon symbolized the spirit of freedom. Frankly, she did appear eccentric to me when she made her first appearance. The more you read about her, the more mesmerized you are by the reason she lives for – it being no reason at all. The hardships which she takes upon herself so willfully to reach where Roark already is leave you perplexed, until you discover why.

The third most intriguing character of the book according to me was Mr. Gail Wynand, a bully who threw his weight around just to challenge the integrity of an individual. The self-made millionaire showed his new side, or rather, hidden side, after he tied his knot with the woman who he wanted to possess, who he later loved. He was one of the two people Roark loves in this world, for his courage to stand up on his own, against the majority. He had power and knew how to use it to manipulate and break individuals or organisations, the reasons for which changed as the book progressed.

Apart from the three discussed above, all others were second-handers. They were everything which these people were not. The book describes them as parasites, who feed on each other. They do what the world wants them to do, and not what they want to do themselves. But they have the power of collectivism, the power which suppresses individualism, breaks its back so that it cannot stand again. The second-handers are not the villains. They are just helpless against the force of the majority. The have sold their soul which is the easiest thing to do. They loathe the creators just because they cannot be them.

I am not aware of which category I belong to. I am not an altruist, nor an egotist. I am not exactly dependant, but I don’t know if I am completely independent. All I know is that this book has got me thinking, given me a direction. Hopefully, when I go in that direction, I will find my answer.
7 comments: Links to this post

I usually don't upload factual stuff in this space, but then the mega-project by CERN is such an exciting innovation that I couldn't ignore it. I share with you a rap song which gives an ultra-simplified working of the World's Largest Particle accelerator:

By the way, does any one know why did the Hindi news channels have to complicate a scientific experiment to such a level that it almost became a reason for the end of the world, the final apocalypse, in the minds of many? It is quite a rhetorical question, but then how did the move beyond TV seriels, Cricket, reality show updates, horoscopes and crime-fighting (rather sensationalising) and reach scientific frontiers?? I will call it progress at least for the time being. And thank goodness we are not an extinct planet just as yet. I won the bet with my grandfather.
2 comments: Links to this post