It's been ages since I posted on Whispering Shadow (barring the one public announcement below). Over the past two weeks, I have started writing posts but ended up not completing them. It completely reflects the state of mind in which I have been - distracted, like a cranky baby. Toys, books, pictures, lights, food - nothing works for the infant. He keeps crying. He is inconsolable. Others don't know what he wishes because he cannot speak. Yet he himself is not wholly aware of what is pulling him in so many different directions. It is like a cause-less effect, an endless cycle.
An emotional stew has been brewing over the past 10 days, the ingredients of which have been the joy due to celebration, the ecstacy of acheivement, the satisfaction of great food, the faith in destiny, the relief of having lived up to expectations, the anxiety and freedom of handling your work yourself all alone, the monotony of routine, the instability due to chaos. It's literally a jungle in there, with one feeling trying to overwhelm the soul over all others and emerging victorious. But unfortunately, there has been more than one winner, once too often.
Another feature of my season has also been speed. The juggernaut of the events hasn't left me with time to stop and think. My days seem to be flying and every attempt of mine to put a break on them has been in vain. Having learnt from my failed attempts, I have hopped on the wagon and have been making the most of wherever it takes me.
The scrambled post is going to end as abruptly as it is written but I cannot close this one without thanking all those who said ''I told you so" to me. I am sane because of you.
1 comment: Links to this post

One attempt, one call, one interview, one convert, one hell of an institute!

For a change, I surprised myself on my birthday.
(c)All Rights for the logo are reserved by the Management Development Institute, Gurgaon.
7 comments: Links to this post 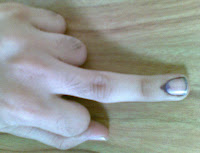 I finally found the right reason to show the wrong finger. On the 30th of April, I voted, as did many other Indians. Since it was my first time, I was all gung ho and reached the polling booth well before time. My name was not in the electoral roll on the polling booth so I had to do a bit of running around to find my polling booth. But I did not give up. I had the mark on my finger (which is unintentionally creative in shape, reminding me of a top view of the head of a flying eagle).
Standing in front of the voting machine, I saw 16 names, all losers in their own right. It was a tough call between choosing a candidate keeping the central government policies as well as progress of the constituency in mind. I could have chosen an independent who brought with him/her only a promise and no political lineage or capacity to bring about change. I could have chosen a seasoned MP who would have a higher probability to be a part of the ruling coalition at the center and a contribute to decision making. I chose the latter because I wanted to prevent a hung assembly, though it is inevitable. At least I can now say I did my bit. Perhaps that was the only reason I voted, stability of governance, that is.
Voting felt nice. For an instance, I felt I was contributing to the fate of the country, knowing that my vote would eventually not make any difference to my city. Some people did the smarter thing by going off on holidays. Actually, the some people comprise of 56% of the total voters. And like always, nobodies (primarily no-brainers, bimbettes, actors, film personalities, politicians, unknown journalists) came up with incredible explanations for the low turn out without any quantitative figures what-so-ever (like heat, long weekend, lack of faith, et al) acting as if the people were stupid to not know. TV circles as well as the newspapers were full of pictures of these unwanted commentators making the most of this opportunity to show their middle finger without any backlash.
What gives them a right to comment on the city's people? Have they ever faced the difficulties of a common man to know what he goes through everyday? They may not be wrong with their reasons but they are not qualified enough to represent the opinion of the city just because they have stardom. It is sad that public sentiment is exploited for publicity gimmicks.
If people choose to not vote, they are still expressing their opinion - the need for better options for governance. Promises were made after 26/11 but nothing has happened- a National Investigative agency within three months seems at least 3 years away, Mumbai doesn't have its own commando unit, policemen have resumed sleeping at railway stations. And it is not only this government that hasn't lived up to its promises.
One can't ask the public to keep its faith in a system which brings no positive results. People are in a relationship with the Government and it is bound to hit the rocks at one point. You have to jump off a sinking ship before it takes you down with you. The voters are doing exactly that.
The voters will blame the politicians for not bringing about change. The politicians will tell the voters that they are not accountable to them since they haven't voted. The same will happen in every election. The vicious cycle will go on and on.
I will continue to vote for the lesser of the evils, hoping that one day my vote will matter.
3 comments: Links to this post